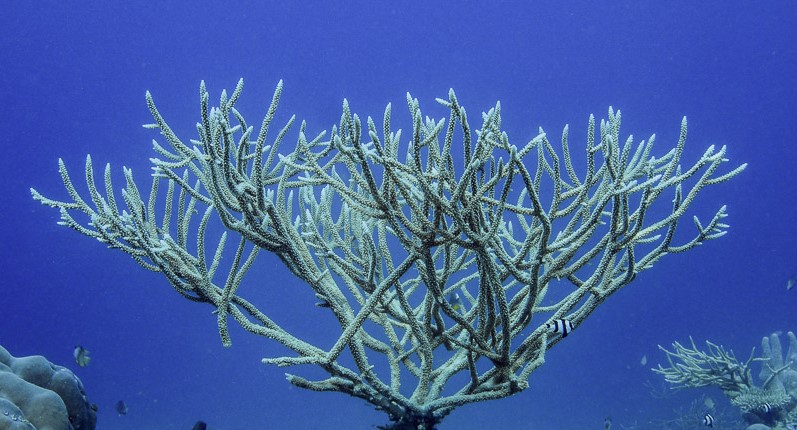 Becoming a Coral Champion with Rescue a Reef

Spending more time at home has led many of us to experiment with new habits and tackle goals we hadn’t found time for before. Many of us have aimed to reduce our waste footprint or learn more about atmospheric pollution and carbon emissions. Ultimately, these lifestyle changes have the potential to positively impact environmental health in a number of ways!

This week, I sat down with our very own Maddie Kaufman and Dalton Hesley from the University of Miami Rosenstiel School’s coral conservation program to learn more about Rescue a Reef, their coral resiliency research, and ways we can contribute to the health of critical reef ecosystems from home.

Q: How did you get involved with coral research and restoration? Was there an “Aha!” moment?

After his undergraduate studies, Dalton “started with coral research and was pretty much learning on the fly!” He got involved at the University of Miami Rosenstiel School (RSMAS) Benthic Ecology Lab and was soon beaming with motivation to pursue coral conservation and citizen science. Although he didn’t initially know how these strong interests could be merged over the long-term, Dalton remained committed to advancing coral conservation while striving to increase the accessibility of marine science for the general public.

Dalton was ultimately afforded the opportunity to develop the Rescue a Reef outreach program, from the ground up, through an internship supervised by Dr. Diego Lirman at the UM RSMAS Benthic Ecology and Coral Reef Restoration Lab.

“I did believe that the future of coral reefs relied on public awareness and engagement, and that’s really what Rescue a Reef aims to accomplish.” —Dalton

Maddie grew up on the Jersey Shore and found her connection with the ocean early on. She was afforded the opportunity to study marine science as an undergraduate and masters student at UM RSMAS. She became all the more engaged as she learned about the issues affecting marine ecosystems and the breadth of associated conservation opportunities. One day, before going out for a shark tagging trip, she coincidentally spotted the Rescue a Reef team loading their reef models onboard.

Maddie forged her first connection with the RAR team during a collaborative event that was co-hosted by DFO. Attendees learned all about coral gardening and marine debris, then planted 50 corals and recovered 120lbs of trash during their dives!

Q: Tell me a bit about coral gardening. What does the process entail? What are the biggest challenges? What stage is the most fulfilling or gratifying?

It all starts with collecting small coral fragments from the wild. The process only requires a small amount and the team has permits to collect fragments that are more loosely attached to natural reefs. According to Dalton and Maddie, they’ve only needed to harvest from the wild a few times.

The coral fragments are then attached to a man-made PVC structure in an underwater nursery, where they may grow and propagate.

“You can choose a location that is best for survivor-ship and growth: close to the reef that the corals have adapted to, but far enough from feeding organisms, possibly where there is a stronger current that can help the coral thrive.” —Maddie

Coral reproduce sexually and asexually. The process of coral gardening makes use of their asexual reproduction to create multiple distinct colonies from a small initial sample.

“Fragments have been collected all the way from Key Largo to Broward County.” —Maddie

“For example: those collected from the Keys are often more resilient to intense thermal stress; adaptations like this may be beneficial in the context of climate change.” —Maddie

When small pieces in the parent colony at the nursery grow large enough, they are fragmented to continue replication in the nursery. 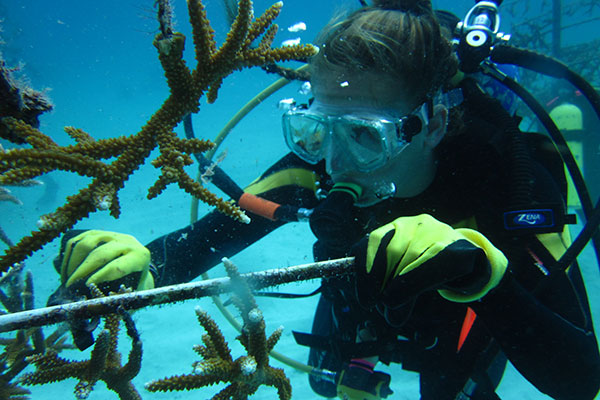 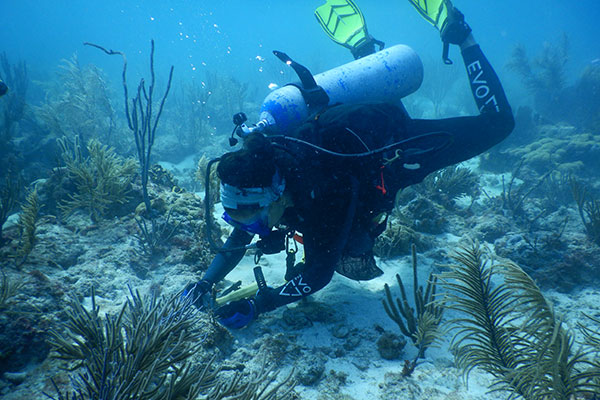 Smaller coral reef fragments have a higher growth rate. As coral grows in size, some of the energy used for its growth is stored for reproduction. So, the team continues fragmenting the coral into smaller pieces for more effective growth and replication in the nursery.

“By continuing to fragment the initially collected corals, increasing their growth rates, we’ve accumulated a large enough self-sustaining standing stock of healthy coral tissue to begin moving some to the reef!” —Maddie

When coral is removed from the nursery to be transplanted, it’s destination can be determined in one of two ways:

A: classical restoration— into degraded reefs that have declined from their historical levels of productivity

Or, B: progressive restoration— in reef habitats that may not have been advantageous in the past but are likely to be better suited under current and future conditions

“Mature colonies are more effective in contributing to reef structure and repopulating the surrounding area.” —Dalton

Q: I have found that such hands-on intervention is often met with more skepticism. My parents always warned us kids never to touch the reefs because they’d die! Tell me a bit about the significance of restoring our reefs with keystone species. What would you say to an outsider that may be troubled by the thought of such “involved” work? What measures does your team take to ensure best practices?

According to Dalton, it’s critically important to acknowledge the need for conservation and restoration of coral reefs.

“The livelihoods of over one billion people are tied to coral reef ecosystems.” —Dalton

When scientists investigate the issues they’re facing, we can all better understand and work towards the solutions that restore them for the future.

“There are laws in place that [explicitly] protect coral species, so an everyday individual is not allowed to nor should they touch a coral.” —Dalton

The Rescue a Reef team takes extensive precautionary measures not to physically harm or communicate germs or bacteria when collecting fragments for coral gardening and out-planting. Unsupervised individuals are not advised to attempt any of the aforementioned procedures that may interfere with marine ecosystems.

Exclusively under the supervision of trained professionals, such as Rescue a Reef’s team of marine scientists, any citizen scientist can receive the necessary guidance to contribute to coral restoration and reef re-building during their hands-on programs.

Q: One big focus at DFO is education, and I know that Rescue a Reef also organizes a number of different events and offers services to increase scientific literacy and encourage individual responsibility. Tell me a bit about your approach to citizen science.

Rescue a Reef is an extension of the Benthic Ecology and Coral Reef Restoration Lab at the University of Miami Rosenstiel School. This program strives to (1) increase public understanding of coral reefs, (2) promote an understanding of the issues they’re facing, and (3) contribute to coral restoration through citizen science.

Beyond raising awareness, the team leads citizen science expeditions and creates an avenue for individuals to donate and directly support coral restoration research.

Because coral reef degradation is not something regularly accessible to the majority of us, these tangible recovery and restoration experiences are especially powerful.

Q: Tell me a bit about your favorite RAR x DFO collaboration.

“We collaborate with DFO because it’s going to take a village. We want to increase awareness on coral reef conservation, but also plastic consumption and single-use waste because overall the way to solve these issues is at the societal level – in reducing climate change.” —Dalton

Every year since our first collaboration, DFO and RAR have hosted events that enable everyday individuals to contribute to restoring local reef populations while cleaning up marine debris. By melding our missions and audiences, we’ve all learned and grown a great deal. These events foster an important sense of hope for the power of individual and community-driven impact.

Unfortunately, it isn’t possible for the Rescue a Reef team to lead citizen science trips offshore everyday. One of Dalton’s most memorable community events was actually inspired by DFO’s mission and the research team’s experience with marine debris along the shoreline:

Rescue a Reef’s first cleanup hosted independently from DFO took place on International Coastal Cleanup Day. Despite the unfavorable weather, attendees came out in droves and collected hundreds of pounds from a small shoreline. This was a big moment for Dalton because “the individuals clearly followed Rescue a Reef devoutly, but had not been exposed to the local impacts of plastic pollution which have such an immediate impact upon coral reef ecosystems.”

Maddie noted that the latest Dive Day collaboration between DFO and RAR was attended by all women, so it was an empowering celebration of women in science! Everyone participated in out-planting corals at one location and then cleaning at the adjacent mooring buoy, which really brought the connection between the two missions full-circle!

Q: How can we all get involved in supporting Rescue a Reef?

“Everyone can be a coral champion from home!” —Maddie

Dalton suggests we look at our actions in the context of a “coral footprint” which closely parallels the concept of a carbon footprint. By reducing our plastic waste, opting for more plant-based meals, making use of public transportation … “essentially anything to reduce your carbon footprint at the individual level can go really far in protecting coral reef ecosystems!” — Dalton

These climate-conscious actions can reduce your “coral footprint” beyond your individual actions too! Bring this awareness into your workplace, among your peers and colleagues, within your municipality, and when advocating to public officials. Moving from individual change to systems-level advocacy can elevate our collective impact for the benefit of reef ecosystems.

You can also check out the Coral City Camera, streaming underwater serenity live for your enjoyment and appreciation— even when far from a coastline!

To learn more about Rescue a Reef outreach and coral restoration research, check out this video, @rescueareef on social media, and the RAR website: www.rescueareef.com.

Safety and Sustainability during the COVID-19 Pandemic